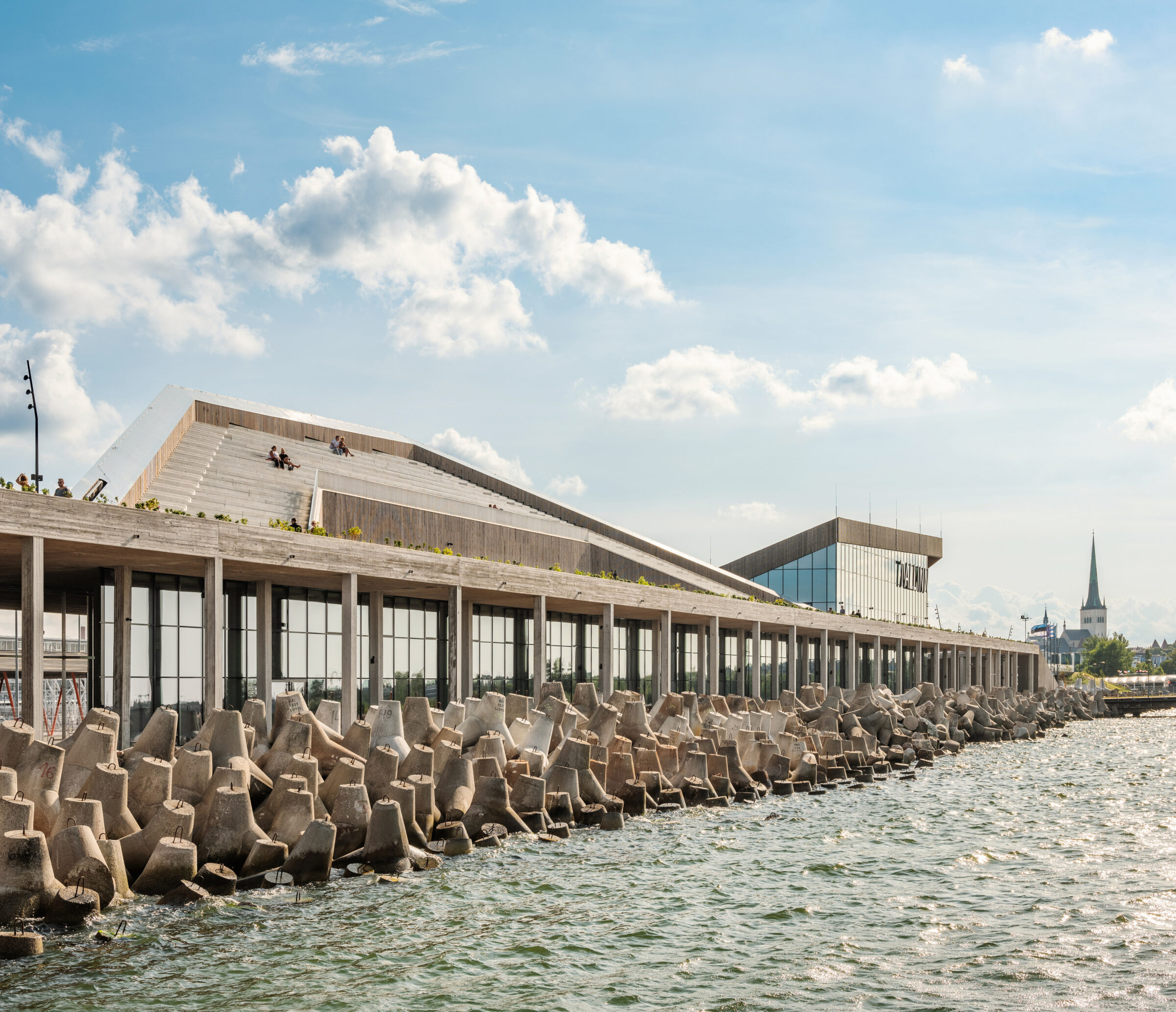 Annual Award of the Cultural Endowment of Estonia (2021)

The cruise terminal is located on the North-West Seawall (Loodemuul) of the Tallinn Old City Harbour, extending from Logi street to the end of the seawall. It is a combination of a promenade and a hall construction, where the cruise terminal functions as the driving element in creating the 850 m long seaside urban park.

The initial task to design a terminal building was developed further by the architects, additionally creating the surrounding urban public space to provide an important element for the process of realisation of the beach promenade in Tallinn. In the future, at the end of the promenade a public transportation stop should be built for ferries, taking passengers to Kadriorg every couple of minutes. The space for the seaside promenade was created by designing the parking area and access roads to the harbour to be more compact than previously envisioned.

“Functionally, the complex is divided into two – the lower level accommodates areas intended for cruise tourists and on the upper level there is a promenade open to the public. The entrance to and the exit from the terminal runs along the street level through a sloped park with vegetation characteristic to the northern coast of Estonia. Along the gently inclining planes, the street takes the citizens above the terminal. The roof of the building includes a light traffic promenade for walking and exercising, lined with a restaurant, terraces with sea view, a playground and seating offering cover from wind from various directions, and small squares. On the lower level, the promenade and the green areas merge, offering possibilities for various pop-ups. The space under the elevated promenade forms an open-air terminal for the third cruise dock to be designed in the future and as well as an umbrella for the tourists walking around the terminal.”

“The interior of the terminal is structured in a simple and flexible manner. Next to the seafront, by the cruise docks extending to the north lies the passenger waiting zone, designed to be sectioned into two areas, when needed, using mobile passport control booths, in order to conduct border control procedures and divide it into smaller spaces with sliding walls. The cruise terminal will be used seasonally, however, to increase the efficiency of the building, it is designed to include the possibility of year-round use. Eight months a year, the waiting areas can be transformed to host exhibitions, fairs or concerts. The interior space has a slated roof to grant access and visibility from the promenade as well. To increase the sustainability of the building, solar panels, sea water heating and cooling are used and even more importantly, the public space, open to locals and acting as a portal to the country also adds value to the space.”